I guess the best way to open up this piece of writing would be a small apology for the pace of content coming out of the blog – I have been super busy over the last few months and that has prevented me from spending hours at night writing these but as we come towards the summer months it will give me time to put some more effort into getting the remainder of blogs out there.

I guess a fitting way to open up my blog again is by writing about one of the best clubs I have come across since I started groundhopping back in January 2015, Grimsby Town. I have been waiting for this day to come for what seems like forever since my first away day with the Mariners at Forest Green, again on a Friday night, again for the benefit of BT Sport (more on this later…) 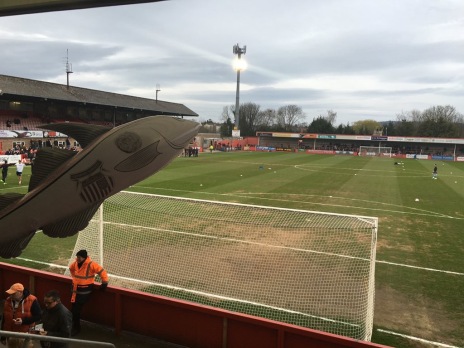 Since that night in Gloucester I have attended 13 games across various divisions in the League pyramid but have consistently had my eyes on Grimsby’s results with the view that tonight could have been an extremely important game in the grand scheme of things for the National League title and it still was, but it would be extremely difficult to prevent Cheltenham winning the league at this point in time. Still, we can hope though. Out of all of the games I’ve attended this season, this was one I was really looking forward to as my love for the fans of Grimsby Town have multiplied over the last few months, I don’t think I’ll ever be able to show my gratitude to my last blog at Forest Green which hit over 4,000 views and for a blog that size, is absolutely incredible. So again, thank you! If we could even hit anywhere near that number again it would be amazing!

This blog isn’t going to be very long as I have already created a Match Day Experience video for my new YouTube channel – it was the first video I ever made, along with a friend of mine, so it would be amazing if you could check that out here! I have since made a further 9 videos and acquired over 120 subscribers, which for me is a brilliant start!

The game itself was a real advert for the National League, a really open game with end to end chances. Below is a video of the equaliser scored right in front of the passionate travelling supporters who had been, again, forced to travel down south for another Friday night game so BT Sport could put the game on the TV. Ridiculous. But I’m not prepared to spend my time biting a how I feel about TV companies broadcasting football.

I hope you enjoyed this very small blog and I hope to see some of you guys, especially those amazing Grimsby Town fans, checking out my YouTube channel and see you all at Wembley at the Non-League Finals Day & hopefully the Play-Off Final!