My amazing week is slowly but surely coming to an end but the quality of football isn’t showing any sign of going out in a whimper. Before the end of my week off work I had Roots Hall to tick off the list prior to another special away day with the wonderful Grimsby Town FC who remain my favourite fans thus far. Good times.

Southend United have been one of those clubs that throughout my groundhopping have beggared the question ‘when the hell will I be able to tick that off?’. As well as Southend, League One itself has been the league that has so far evaded me with only 6 grounds being ticked off including Millwall during this week away. I have clubs who I can go around the country with in the Premier League, Championship & League Two which has resulted in a poor League One

record up until now so I was really looking forward to heading to a new part of the country in Southend-on-Sea. It would also be good to meet up with Scott and Richard (the blog is finally here, Richard!!!) who are a pair of groundhoppers who have both completed the 92.

I predicted that the journey for me would be alright as I was heading off at about lunchtime from Wembley but we all know this is London I am talking about. So it still felt like it took forever. I was still there in plenty of time though before meeting Richard, so I went for a walk around the seafront and the shopping areas for a couple of hours and bought a few PS3 games before heading to the Wetherspoons outside the Southend Central train station for a pint and some dinner with Richard, Scott and Ian. These visits to Spoons are becoming too much of a regular occurrence but they are so good and cheap so its the groundhoppers’ dream! My Gourmet Chicken Burger and a drink cost £7.70 which I don’t think is too bad at all. Time for the walk to the ground.

The approach to the ground was pretty special, the sky didn’t half make a good photo which I loved. My mood was soon brought back down to earth after heading to the club shop to get my programme & pin badge to find they didn’t have any on sale. Balls. This little thing does my head in as it ruins the small details that I love about going to new

places, I know they sell out of these types of things but its so frustrating as it will mean I’ll need to come back simply to get one or get it online. Ah well, bring on the game!

Roots Hall is a brilliant, traditional ground. I loved it. I also had a brilliant view, thanks to Scott who had got us seats near the front of the upper tier in the South Stand. One thing that I won’t ever get use to with these older grounds is the leg room. They aren’t very suitable for a man who is 6ft 1. I spent most of the 90 minutes fidgeting to try and get comfortable. Then again, it isn’t just old grounds as Ashton Gate is a real tight squeeze also.

Up until now I really haven’t been blessed with very good games in the Sky Bet League One but tonight certainly was an exception. I was rewarded for all the miles traveled with a cracker. It was a really entertaining and a pleasure to be a part of. It started off with a few small chances for both sides before Southend United took the lead, probably against the run of play slightly through a very scrappy goal following a corner which fell to the feet of Tyrone Barnett, who poked home to give the hosts a dream start. This would be one of the high points of Barnett’s game as the fans were frustrated with his play throughout the game. The game was just 6 minutes older when Sheffield United managed to pull a goal 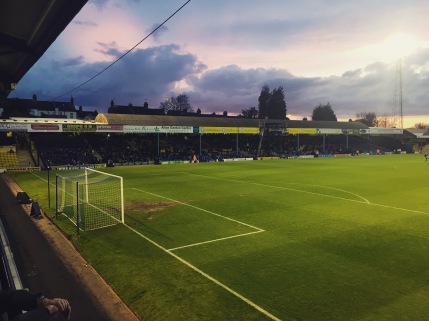 back to level the scores at 1-1 following a good free kick move which left Dean Hammond with all the time in the world to head past the onrushing Southend goalkeeper Daniel Bentley.

That bought the first 45 minutes to an end and both sides would be looking to keep their very slim playoff chances alive but it would be the home side that would push on to take the three points after a solid second half performance. It started in a very similar fashion to the first 45 with chances for both sides and 15 minutes later saw the 3rd goal hit the back of the net, an absolute screamer by David Worrall from the corner of the penalty area which was drilled across the goal into the far corner via the post. As you may see from the photo above, we had the perfect view of this, if only I got it on record. I guess I can’t moan, this was the final game before starting up my YouTube channel which is now finding its feet!

For the final 30 minutes it was all about Sheffield United trying to get back into the game whilst attacking the goal in front of their travelling fans, which I must say, had decent numbers for a Tuesday night in Essex but I was expecting a hell of a lot more in terms of atmosphere. Their attacks came close to reward. The post was struck as they approached 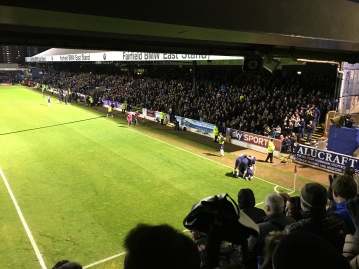 the later periods of the games and it was from a Sheffield United attack that led to the 4th and final goal of the game. A counter attack and solo goal by Jack Payne secured the 3 points with a beautiful effort which started in his own half and ended with a neat chip over the goalkeeper to make the score Southend United 3-1 Sheffield United. A brilliant end to a thoroughly enjoyable evening surrounded by good people. One of the best things about groundhopping is the new faces you see at different grounds. I absolutely love it.