I do like to class myself as a groundhopper, don’t get me wrong, but one thing until recently I haven’t been very interested in is going much beyond step 6 (National League South/North) in the English Football Pyramid but over the last 6 weeks or so I have been converted slightly. I know a number of groundhoppers who will drive mile after mile to go and find a tiny ground in the middle of nowhere, 4 hours from home but this still fails to interest me that much at the moment. However today was different. It’s Easter Monday and I had 3 games planned in a day and these were AFC Wimbledon vs. Portsmouth at Kingsmeadow with a 12:45 kick off. This would be followed with the National League South game between Sutton United & Whitehawk at 15:00 which would lead to the League One tie between Millwall & Burton Albion at 19:45. This seemed easy enough, the weather was good and I was on track to Kingsmeadow when a couple of other groundhoppers, The Swedehoppers, messaged me to tell me that AFC Wimbledon was off due to a waterlogged pitch. Where this water came from I have no idea!! So this plan was off. 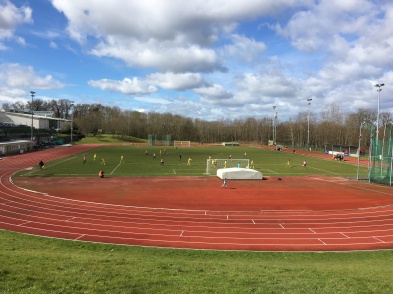 Whilst driving on the motorway, on route to London I had to attempt to plan where to go next as I was desperate to get three in a day done and was prepared to lose a ground which was part of the 92 to do so. After I caught wind from a couple of other hoppers, Hopper and Son, Guildford City of the Combined Counties Premier (Step 9) were playing at 11:30 and there game was on! Then with Aldershot Town of the Vanarama National League playing at 3. Sorted. Lets head to Guildford! Due to timings it was going to be tricky to get to Guildford for the 11:30 kick off but luckily from where I started my detour the traffic was kind to me. I managed to get there about 15 minutes prior to kick off which gave me enough time to have a wonder and take a few pictures. I must say, for a Step 9 team, they have a beautiful ground -surrounded by their athletic track which I’m not much of a fan off I will admit. They have a main stand along one side with a hill behind one goal which does provide some brilliant views if not a bit far away from the pitch.

however once young Liam arrived it was off my seat for a walk around, bless him. For a bit on context, Liam is 5 years old and has visited 122 grounds across the country which is nearly double what I have done – shocking from me, brilliant from him and his dad! The game itself was, as I imagined, fairly poor. It was odd to go from Step 9 a few days back at Hereford in a 7-0 classic to this. It had 0-0 written all over and I was worried that my record of no 0-0’s since November was to be in tatters. Luckily for me it ended 0-1 to the visitors so that was a relief for me! The first half didn’t have any chances worth noting and the second half was fairly similar apart from it included a scrappy goal for the away side. A bit of pin ball allowed the ball to land at the feet of Kobe Botwe who managed to scuff the ball into the net. A fairly poor game and a disappointing result for the vast majority of the 98 fans in attendance, a few had made the journey for the away side. All in all not a bad, unexpected trip to Guildford City.